Globalization essay: what are the positive and negative effects on the developing world? 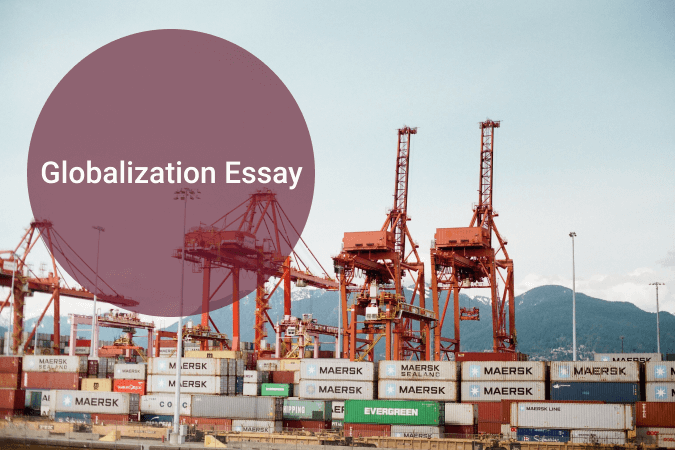 Everyone seems to be talking about globalization nowadays. But not everyone seems to realize the actual meaning of that notion to the fullest. After the collapse of communism, people don’t stop discussing it.

We try to understand whether the importance of it was higher earlier or whether it is more popular now, whether it is trying to crowd out the national state, and even whether it exists at all. The globalization essay topic is really controversial and confusing, able to make everyone reach a deadlock.

The only thing everyone can agree upon is that the process of globalization affects economies not only of the developed countries but also of the developing ones. We are involved in this phenomenon whether we want it or not and its nature is not anthropogenic. Human beings cannot reverse the process, so we should understand it and how it affects different countries much deeper.

This is the integration and interaction process between the people, businesses, and governments of various countries. In other words, it is the process of unification and constant contact between different groups of society.

International independence is growing in different societies in the world. The process itself influences technology, trade, culture, politics, the environment, and even the global economy. Globalization also affects the life of people from different countries on Earth.

When did globalization start?

When working on our globalization essay, we should pay attention to the history of this phenomenon. It is necessary to admit that globalization has affected different people and societies across the world for ages. Thus, it was widely discussed by communities.

Some scientists relate the beginning of the process to the Bronze Age in the 3rd century BC. But its history depends on its definitions. And since there are many of them, there are different theories of globalization history.

If we take into account only its narrower definition, we can say that the process started in the 15th Millenium. It happened when Cape of Good Hope and the Americas saw the first explorers from Castile and Portugal. In our globalization essay, we divide the history of the phenomenon into three main periods:

Nowadays, this notion covers not only the unification mentioned above but also the trade, knowledge, and experience exchange across the world. The aim of it is to enrich the environment, culture, and science of different countries.

The influence of the globalization process seems to be obviously positive. But some people have a different opinion. In our globalization essay, we would love to highlight why some people criticize that phenomenon. Joseph Stiglitz and Ha-Joong Chan think that globalization preserves poverty instead of reducing it. And those who are against the free market economy also support that viewpoint.

The IMF also highlighted that inequality might be increased in developing countries with the import of new technologies and foreign investments from the industrialized nations. They also stated that the advantages of the phenomenon are available only for a small range of countries.

But not only have the developing countries “suffered” from that phenomenon. Some developed countries also experience negative effects. It concerns those countries that transferred their production to cheaper countries and therefore, harmed employment in their developed country.

In our globalization essay, we can see that there are both good and bad sides of the process for the global economy. Our goal is to find out whether the benefits mentioned above re-hang all the disadvantages.

What are the drivers of globalization?

The process is defined by three main factors, including:

A very special role in the overall process belongs to technology. It allows everyone and everything, including people, ideas, and goods move from one country to another in very short timeframes.

Let’s recall how people have communicated and exchanged information decades and hundreds of years ago. It has taken much more time than it does nowadays thanks to the development of technologies.

The trade plays not a less important role in the process and its main effect on different countries is the increase of their interdependence. Almost none of the modern countries are self-sufficient. The trade barriers are almost eradicated and there are fewer restrictions on foreign investment.  The economic integration increased and drove globalization by international investment.

International investment became beneficial for many countries while new jobs, companies, and sources of income were created.

There are four main advantages of the phenomenon and many people often neglect them. The positive sides of globalization are as follows:

The global market has a higher competition level nowadays and it is one of the most obvious positive sides of that phenomenon. It means that we all can enjoy better services and goods of much better quality. The demands grow while customers have more options and a much better choice.

Those companies that want to survive and be in demand have to react to people’s needs.

But apart from the high competition, globalization caused stabilized safety and efficiency of the markets. Different discounts lower the prices and, therefore, increase affordability and demand among consumers.

Some companies may not offer any discounts; however, they use their extra profit to expand their services or pay higher salaries to the employees. The countries that depend on each other will not attack each other, so the level of global safety and security is also increased. This also improves human rights while the media all over the globe covers human rights violations.

The poverty in those countries is caused more by not effective reforms, poor economic policies, and governance. The impact of globalization is so different on different levels that it is difficult to identify how the developing countries benefit from it.

If talking about globalization, we should take into account also the environmental pollution, vulnerable prices, an insecure job market. Globalization makes countries use more natural resources and, thus, more transport and fossil fuel.

It means that globalization causes pollution and change in climate and threatens humanity. Industrialized nations have to stay competitive and reduce their prices against other countries producing the same goods at a lower cost.

Effects of globalization on world trade

Considering everything above-mentioned, we can say that the job market is more temporary and insecure due to globalization. In the western part of the globe, the level of unemployment became much higher while companies have to outsource some of the processes.

However, globalization enhances economic growth. The countries have to ensure unlimited trading with no restrictions. If we take a look at such a country like Uganda, we will notice that reducing trade limitations caused a significant improvement in their economy, according to Lawal, 2006.

Lots of manufacturers have moved to new locations in developing counties. It encouraged foreign investment and increased proximity to cheap labor thanks to lower taxes and tariffs. Developing countries created more jobs and employment opportunities. The import of new technology is an undeniable benefit of globalization on world trade.

Everything stated in that globalization essay above proves that global competition increased due to globalization. All countries benefit from it while it ensures a better quality of goods and services and lower prices. Consumers have a much better choice.

Globalization impact on health and disease

The impact of globalization on health and disease is especially obvious in developing countries. It opened opportunities for control, prevention, and elimination of different infectious diseases. Modern drugs become more available on the international market and can be easily delivered to countries where people need certain treatment.

The globalization paper is aimed to define the main reasons, benefits, and drawbacks of globalization. And we can say that it affected the employment structure in different countries of the world as well.

Agriculture was the main occupation field for most people in developing countries previously. The appearance of foreign companies in different markets led to an increase in jobs in assembly production and other fields.

Male agriculture work decreases from 62% to 14% with the development of capitalism and globalization. But the unemployment rate in developed countries increased with globalization while lots of manufacturers moved to the developing countries and created lots of jobs there.

Takes only several minutes to get help and hire our experienced paper writers.

The negative effect of globalization is that some cultures started to fade. Almost everyone in the modern world has access to foreign television, media, radio, and culture. Lots of traveling and migration as a result of globalization also caused a mixture of different cultures.

Based on the stated information, we can say that globalization has its benefits and drawbacks for different countries and cultures. It can create endless opportunities and harm our society at the same time. But for sure, it is a very complex and inevitable process and each of us is an integral part of it.